Own a great residential edifice in the New Administrative Capital in “La Verde Casette Villas Compound كمبوند لافيردى كاسيت” as it will fulfill all of your requirements in terms of luxurious accommodation, facilities, and endless services. It is also the first villa compound in the R8 district that was built on an Italian style, and it was built by “La Verde Egypt” one of the largest real estate companies in Egypt.

Click on ” La Verde Apartments Compound ” to know the prices of reserving Laverde apartments in installments or cash and their different areas.

La Verde Cassette was designed differently from the rest of the residential compounds in the New Administrative Capital. It is considered the first villa compound in the R8 district built in the Italian style inspired by Roman architecture which is famous for its unique art and carving on the walls, as well as the arches, pillars, and domes. The word “Cassette” means “Villas or Small Homes” in Italian.

These beautiful villas are designed amid a large area of ​​green landscapes, with fully integrated facilities to suit the modern Italian lifestyle, giving the resident of La Verde Cassette New Capital a true taste of modern Italian Roman life, as the design of the villas is surrounded by a circle inspired by Roman architecture, so the villas are placed In circles with vast green corridors between them to provide landscapes and privacy.

The most thing that distinguishes La Verde villas is the white ornate pillars, the large arched windows that let the daylight & the view over the beautiful exterior views, and the impressive marble staircases that exist in the luxurious ancient Roman palaces. Besides, La Verdi will create your own swimming pool inside the villa with a private garden as well.

La Verde Cassette location occupies a large area of 60 acres, and despite this large area which could have accommodated a larger number of buildings, the area of ​​residential buildings is only 10%, as it was possible for the project to accommodate more than 460 villas, but the company of La Verde has limited this number to 200 villas Only, which allowed them to provide La verde villas with spacious views over green areas with greater privacy and more comfort.

La Verde Cassette Compound is unique in the variety of designs and spaces of the villas in it, as they are divided into townhouses, twin houses, and stand-alone villas. As we mentioned that the compound includes only 200 villas in an area of ​​60 acres, so the areas of the villas in La Verde Cassette New Capital are very large, and the spaces of La Verde cassette villas that include a garden start from 270 m2.

– Townhouses prices in La Verde for sale in installments or cash start from 3,950,000 EGP.

The prices of Compound La Verde Cassette New Capital may have changed, for the updated prices Click Here

The design of La Verde Mall cassette is inspired by the designs of the ancient Roman theater to complete the aesthetic architectural appearance of the whole compound, and here you will have a different shopping experience, where you will find shops, international stores, luxury cafes and various restaurants, along with many other facilities and entertainment services, with beautiful landscapes to provide you with a safe and healthy atmosphere for Social communication and for spending quality time with friends and family.

Finishing Specification of the Villas

It was decided that the units in La Verdi cassette will be delivered semi-finished, but you can request that your villa in La Verde be fully finished with the best specifications during contracting with the company with paying the difference.

La Verde Cassette Compound offers a new concept of beauty and elegance through its unique designs, in addition to the set of services and features it provide to ensure privacy and luxury, which presented in:

Please fill the form below to show the full brochure of La Verde Cassette.

The advantages of La Verde Cassette project in New Capital are mainly revolving around the green life, as the project includes only 10% of villas with high-end designs and 90% of green areas, landscapes, basic facilities and other services, not to mention the location of the project that is in the heart of the Administrative Capital and its proximity to all the important and vital places, which guarantees a classy, luxurious, private and secure life all in the same place.

Laverde cassette Compound is located in the New Administrative Capital, and the New Capital, in general, is considered far from Cairo and many other important places for some people, but this is a false concept and it can’t be considered as a real disadvantage, as the Administrative Capital is near to the largest and most famous areas in Egypt, such as Al Rehab, The Fifth Settlement, Al Shorouk City and others, in addition to that La Verde Compound itself is a self-sufficient area, and there is no need to get out of it in the first place.

How much does the meter's price start in La Verde Cassette Villas?

What are the villas installment systems?

Payment of 10% as a down payment, and installments in up to a maximum of 6 years

What are the communication methods for booking La Verde Villas?

When is the time of delivering the villas?

The villas will be ready for delivery in 2023

Who is the owner of the project?

What is the total area of Laverde Cassette project?

The total area of the project is 60 acres

What are the areas of the villas in La Verde Casette?

Where is the location of the villas' compound?

It is located in the 8th district, R8, in Block K1

How much are the prices of La Verde Cassette New Capital's villas? 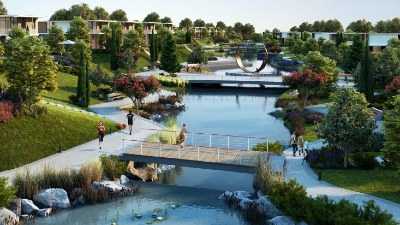